Skip to main content
Welcome to our site. Please text us if you have any questions.

Learn About the brand

IONA or “Isle of the Druids” as it was called in Ancient times, is an Island between Ireland and Scotland known in Gaelic as the Isle of Colm Cille. <br>The Island has a deep Celtic history. It is the burial place of Scottish and Irish Kings including King Duncan, Donald and Macbeth. <br>It was a principal seat of Celtic learning in the British Isles and was attacked regularly by the Vikings. Throughout this time skilled crafts using Metal, Wood, leather and Glass were practiced. It is said that Iona was one of the first places on the British Isles, that the skilled craft of working with early glass was practiced. <br> <br>In 2005 with all this history and craftsmanship in mind, Eugene Young Master Glass Cutter and designer left Waterford Crystal after 28years and set about building Iona Irish Crystal, believing that the most important goal is to continue the craft of Mouth Blown, Hand Cutting and Hand Engraving traditions, and to nurture and celebrate the art of producing Crystal. Eugene's Family are steeped in Craftsmanship from Wood Carving to Stone Carving and thatching going back over the years and today thatching is a slowly developing craft again here in Ireland. <br> <br>Over the part seven years Eugene has built up Iona Irish Crystal, to where it now designs and produces a vast range of crystal products and World Championship Trophies in Dungarvan, Co. Waterford, Ireland. Iona Irish Crystal ships to all parts of the world. <br> <br>Iona Irish Crystal is dedicated to superior artistic and technical standards in hand cut Irish crystal. The quality of our crystal and perfection of Iona Crystal's hand cutting and engraving are unsurpassed by any other crystal. 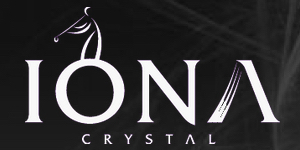 Come in to try on anything from the Iona Crystal collection.